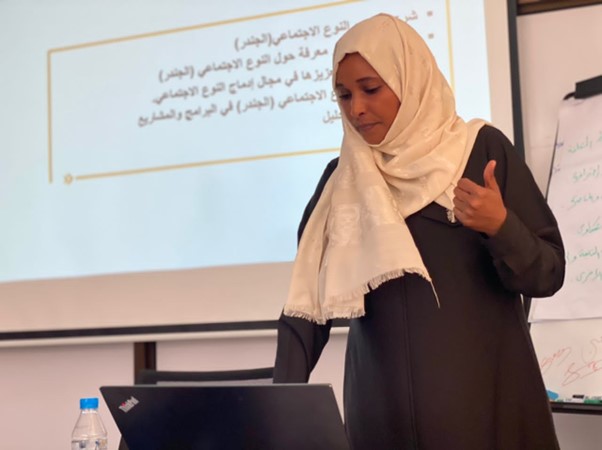 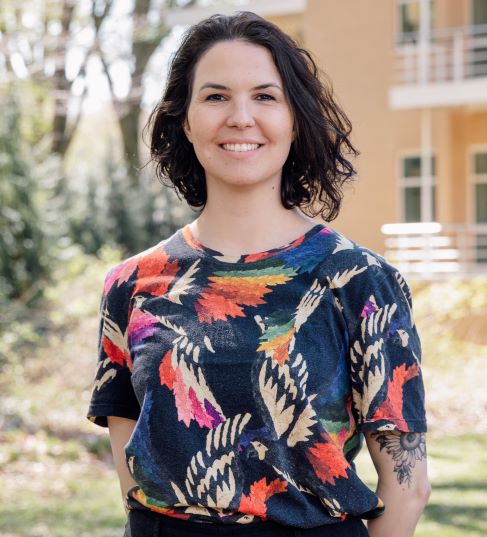 Wafa'a Mothana has become a gender mainstreaming leader in her country. Not just because of her work in designing gender action plans for projects in Yemen, but because of her dream of creating collective and powerful gender-based action plans worldwide. Read on to learn about her story.

Speaking to Wafa’a, it’s impossible to miss her passion when describing her work and how gender mainstreaming changed her perspectives and other women's lives in Yemeni communities. Wafa’a is an empowered and strong woman who is deeply focused on her mission with an unmatched passion and accountability.

Wafa’a works in M&E (Monitoring and Evaluation) at Small and Micro Enterprises Promotion Services (SMEPS) and participated in MDF's Gender Mainstreaming course. This is how MDF had the privilege of meeting her.

Wafa’a has led many projects in Yemen, and witnessed that integrating gender mainstreaming actions in the programmes and projects was imperative to bringing real and long-lasting change. To boost her skills in this area, she began looking for training on the topic.

One of the assignments Wafa’a has worked on is called Brave Woman, organised by SMEPS. Its objective was to give financial and technical support to women in Yemen to own and lead businesses. In this programme, Wafa’a put into practice what she learned in the Gender Mainstreaming in Projects (GMP) course.

"On a field visit during the Brave Woman project, I saw the change in mentality and knowledge on those women's lives. I observed how the gender-mainstreaming approach empowered them in leading their enterprises.”

"I got inspired to see so many beautiful stories of smart, empowered, excellent decision-makers women. They are definitely people who can contribute to entrepreneurship in their communities, supporting the community and succeeding. I felt proud of what they are and what they can be."

‍Wafa’a was so touched by those women's stories that she wrote a blog to share their inspiring trajectories. You can read it here.

For Wafa’a, it was crucial to understand the methods and tools needed to implement gender equality and social inclusion in the project cycle, and develop the skills to perform gender analysis.

‍These topics were fundamental towards structuring gender mainstreaming in the programmes Wafa’a leads.

Wafa’a quickly turned the theory into practice. She began to add gender analysis questions as part of the baseline survey in her projects. These questions are now asked at the beginning and end of the project's interventions, and the answers are compiled in reports.

‍Afterwards, Wafa’a and her team analyse them and see if there was a transformation in knowledge and mentality concerning gender.

She also guides her teams and assistants, opening the window of gender inclusivity, so everyone is on the same page in terms of making the project successful.

‍Wafa’a also does case studies and field visits to understand the women's environment and see where they work, what they do, and how they do it.

Initially, it was a big challenge for Wafa’a to implement the subject of gender in the projects, as she was working on these initiatives alone. But soon, she built a team to help in this vital area.

‍She also counts on the support of her manager, Safiya Aljabry (Executive Department at SMEPS). Safiya managed, supported, and guided Wafa’a in taking the course and implementing a gender-based approach in her new projects.

‍We were inspired by their professional relationship, and seeing a woman helping another to achieve something bigger: bringing change to local communities and empowering more women to claim their deserved space.

A bright future for Wafa and gender mainstreaming

Wafa'a Mothana has a personal dream: she wants to promote more equality and empowerment, and spread knowledge of gender inclusivity via projects she leads. She aims to become a leader in gender mainstreaming and travel worldwide to share her message.

"Everyone must have chances and rights in this life. I want to bring equality to all people. No matter who you are."